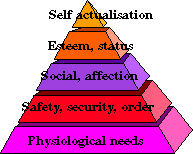 Though the ‘deficiency needs’ may be seen as ‘basic’, and can be met and neutralized (i.e. they stop being motivators in one's life), self-actualization and transcendence are ‘being’ or ‘growth needs’ (also termed "B-needs"), i.e. they are enduring motivations or drivers of behaviour.

A dictionary definition is:

The process of establishing oneself as a whole person, able to develop one’s abilities and to understand oneself.

Self-actualization (a term originated by Kurt Goldstein) is the ‘instinctual’ need of humans to make the most of their unique abilities.
Maslow described it as follows.

Self Actualization is the intrinsic growth of what is already in the organism, or more accurately, of what the organism is. (‘Psychological Review’, 1949)

A dictionary definition of ‘transcend’ is.

To go above or beyond expectation.

At the top of the triangle, self-transcendence is also sometimes referred to as spiritual needs.

Viktor Frankl expresses the relationship between self-actualization and self-transcendence clearly in ‘Man's Search for Meaning’.
He writes:

Maslow originally found the occurrence of peak experiences in individuals who were self-actualized, but later found that peak experiences happened to non-actualizers as well but not as often.
In his ‘The Farther Reaches of Human Nature’ (New York, 1971) he writes:

Wilber was in agreement with Maslow about the positive values of peak experiences saying, ‘In order for higher development to occur, those temporary states must become permanent traits’.
Wilber was, in his early career, a leader in Transpersonal psychology, a distinct school of psychology that is interested in studying human experiences which transcend the traditional boundaries of the ego.

In 1969, Abraham Maslow, Stanislav Grof and Anthony Sutich were the initiators behind the publication of the first issue of the ‘Journal of Transpersonal Psychology’.

This information (and more) can be found in the online encyclopaedia Wikipedia.