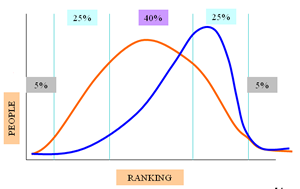 The link with reward

Appraisals may be given other names, for example, a performance and development review.

Appraisals are often a byword for fear and apprehension both for the giver and the receiver.
There are so many negative aspects to the ‘standard’ appraisal that is amazing they have not been extinguished by natural selection.
However, they still exist and most people see the appraisal as a direct link with performance and reward.

They are usually held annually.

In this way any reward that may be attached to them can be tenuous and linked to the future event of the appraisal.
In terms of motivation, the existence of a possible gain will initiate a particular behaviour but will not sustain it.
This is because the consequence of the correct behaviours are well away from the actual performance of the behaviour.
It is a positive reinforcement that is in the future and mostly uncertain.

Due to the distant nature of the reinforcement it is easy for performance levels to drop as people can easily be put off their track.
It is for this reason that any positive reinforcement should be allied more closely to the actual performance.
If the compensation is better linked to the performance both the company and the individual should gain as performance increases.

It rare that these will bare any real relevance to the actual performance as they are a future event.
People are hardly likely to improve their daily performance by considering their annual bonus may or may not rise by say 0.5%.

These systems give an apparent sense of fairness.
If the company does well then the individual does well.
If everyone in the organisation pulls together success will bring its own reward.

However, the whole organisation could work extremely hard and still achieve zero profits owing to forces beyond their control.
These could be anything from adverse raw material costs, exchange rates, increased costs to cover changes in law, compensation claims etc.
As far as the worker at the front is concerned he or she has done their bit and seen no reward.
To make matters worse many will feel that these matters should have been handled better by the senior management whose reputation now begins to wane.

Even if there are profits, and an appropriate reward, many will feel that their contribution, justifiably, has been undervalued and that
many of their colleagues’ contributions has been overvalued.

There is never an unlimited amount of money for pay increases.
This leads to the easy conclusion that if one member of the organisation is rated highly then another will be rated lower.
One man’s gain will be another’s loss.
This will inevitably lead to infighting at some level.

To counteract this, pay rises are usually evened out across the organisation or within levels of authority.
Hence, they will never relate to actual performance.
Once again daily performance will not me motivated by the thought of a pay rise because it is in the future and uncertain.

Many benefits are used in the recruitment of personnel as an enticement.
However, things like company cars, great pension schemes and health plans do not motivate you on a daily basis.
These benefits are not contingent (see Positive Reinforcement – part 2) upon performance.

Maybe this section should be called ‘ranting and raving’ instead as it causes more problems than it solves.

Few would have been spared the rating of their performance in some fashion or other.
Nearly every scheme will generate low scores for poor performers and high scores for great performers.
These are notoriously difficult to administer and some even result in the use of calculations affording decimal places and rounding etc. There is no way that performance can be measured in this way. Distinguishing easily between say
two low performers or two high performers in this manner is impossible.

Most of the time the rating will be in error. If you rank someone low when they are actually high their motivation will drop and so will performance. If, on the other hand, you give a high rating to a low performer he or she will usually accept the plaudits and go back to the old ways.

In order to try to assess people closer to their actual behaviours some organisations carry out performance appraisals more regularly. This usually just generates more paperwork for little if any benefit.

Managers will expect any performance ranking to fit a ‘normal’ Gaussian distribution curve (orange) as in the diagram above.
Once you have a modest number of people within your department you will be forced to distribute your assessment of their performance according to the curve.
Your manager will be told to, in effect, enforce the system.

If you are lucky enough to have a department full of high performers and you rank them all at ‘5’ your manager will object.
You will be forced, in effect, to rank some high and some low and some in the middle.
The result is reduced motivation.

This can be an extremely frustrating experience for all concerned especially as no one goes out of the way to recruit low performers.
This system states that the majority of your workforce is below average!
How can you perform at the highest levels if this were the case?

In practice the distribution is usually skewed towards the right as in the blue curve above.

The only truly successful appraisal system will be one where the rewards are more closely linked to the daily behaviours.
This can be accomplished, with a little thought, using a performance matrix.
This is covered in more detail next.