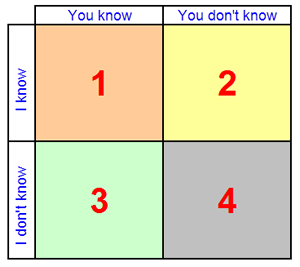 A simple tool to think about how you see your self and others see you is the JoHari window.

The Johari Window, named after the first names of its inventors, American psychologists Joseph Luft and Harry Ingham, is one of the most useful models describing the process of human interaction.
A four paned "window," as illustrated above, divides personal awareness into four different types.

Joe Luft and Harry Ingham were researching human personality and group dynamics at the University of California in the 1950's when they devised their Johari Window.

Rather than measuring personality, the window offers a way of looking at how personality is expressed and helps with the motivation of others.

The Johari window has also been referred to as a 'disclosure/feedback model of self awareness', and by some people as an 'information processing tool'.

It represents information, for example, experience, views, feelings, skills, intentions, attitudes, motivation, etc which are internal or external to an individual and in relation to their group.

This information is then related to the four sections of the JoHari window.

Referring to the above diagram.

These are items that you and I both know about me, for example, name, job title.
These are obvious attributes in plain view and are thus known publicly.

These are things that only I know about me and you don’t.
Hence, these are private.

These attributes are clear to you but I don’t notice them.
For example, easy loss of temper, don’t listen, hasty in making decisions, workaholic, poor delegator.
The only way you will get to know about these blind spots is to ask for feedback (see Feedback – part 1).

These are items that neither you or I are aware of.
These are your subconscious drivers but have an impact on myself and others.

In some meetings you may often notice a sort of herd mentality.
This is where as individuals many people are either afraid, shy or have another reason for not raising and issue.
However, once the issue is raised by another, often some sort of objection, others then jump on the band wagon.
You suddenly find a negative (or positive) situation where there was no evidence of it existing before.

However, as a leader, with insight, you will have honed this skill to recognise a potential trend in feelings.
It will be up to you to encourage the feelings to the surface and explore their opinions.
If you don’t, people may be de-motivated at best or lead to project failure at worst.

Many decisions are not necessarily based upon the logic of the arguments but because they support (or do not support) core values of the organisation.
This view can be extended to the politics of the organisation and its culture.
If there is a culture of blame and retribution then failure will not be tolerated. This will breed fear, dishonesty and very poor working practices Resulting in low motivation.
Individuals will become stressed and the organisation will experience a high staff turn over.

You must be aware of the wider environment in which an organisation exists.
Typical areas are market trends, environmental issues, health and safety, legal issues, national and international politics etc.